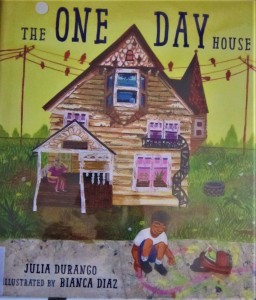 Today’s book is, at its core, about love. If we are lucky, we have supportive, caring people in our lives. People who make us better than we usually are. I am super-lucky and have a whole bunch of wonderful individuals like that. I just got back from an amazing cottage weekend with a ‘pretend’ aunt of mine. (Pretend in that we’re not blood-related…not pretend as in imaginary. Just wanted to clear that up.) The One Day House seemed to be the perfect book to review upon returning home. The grandmother character, Gigi, reminds me of my pretend aunt. She is welcoming and kind and caring.

Wilson’s promises seem rather big for such a small kid. But he tells other people about his ideas. He spreads the word…so that ‘one day’ becomes a fantastic reality.

The book ends with all sorts of neighbours and friends showing up to help make Gigi’s house just perfect.

I read this story to the family after dinner tonight. And everyone had a different opinion about the book. As is the norm around this house, actually.

Jess: So, what did we all think of The One Day House?
Karl: Well, I thought-
Vivi: I should go first, otherwise I might copy what he says.
Karl: True.
Vivi: OK, so I liked it. I really enjoyed the part where everyone came together and helped and really made the house a reality. That was so kind.
Jess: What did you think, Lily?
Lily: I loved it!
Jess: Karl?
Karl: I really like the message of the story. It’s great. Like, you can have these big ideas but they really mean nothing unless you act on them. It encourages kids to follow through with their ideas. But the art…I didn’t like it.
Jess: Why not?
Karl: Some of the perspective is really weird. Some of it is good, but now and then it goes all wonky. And the people characters aren’t great.
Jess: I liked it! I thought it was really stylized. I enjoyed the art.
Vivi: I’m with Daddy.
Jess: The only thing I wasn’t sure about was why Abraham Lincoln was cleaning the chimney.
Karl: What?
Jess: Look (points at character dressed in stovepipe hat)
Karl: Do chimney sweeps dress like that?
Jess: I don’t know.  (Googles it) It doesn’t seem like it. Maybe in the past?
Vivi: I give it an 8/10.
Jess: Lily, your thoughts?
Lily: 11 out of 10!

So, overall, we enjoyed The One Day House. I suspect you will too!

View all posts by pinkjellybean11