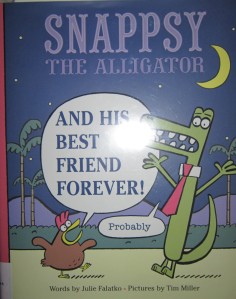 I always like books about unlikely friendships. I once wrote a series of  stories about a bear and a duck that I was really excited about, until I found a bazillion books featuring a bear and a duck. (Slight exaggeration, but not by much.)

Anyway, lots of animal pairings have been done (bear and duck, bear and squirrel, frog and toad, pig and llama…) but not alligator and chicken.

Snappsy and his chicken friend (later revealed to be “Bert”) are hilarious.

Bert really, really, REALLY wants to hang out with Snappsy and do BFF stuff with him. Snappsy is…well…not SUPER enthusiastic about this. He’s really more interested in doing stuff alone.

But Snappsy wants none of it. He sends Bert on his way.

Then, after doing a few activities by himself, Snappsy realizes something: he really misses Bert. So he writes him a sleepover invitation. Fortunately, Bert is having a blow-up pool party right outside Snappsy’s door.

They decide to have a sleepover together (and they have a great time) and then Bert mentions that he’s going to move in.

Bert is driving a moving truck.

The art is really excellent and cartoon-y. The characters are both loveable in their own way. The premise is funny. It reminds me a bit of I Love You Already in that one friend is really into the friendship and then the other one realizes that they’re into it as well.

The girls really enjoyed the book and found it generally hilarious.