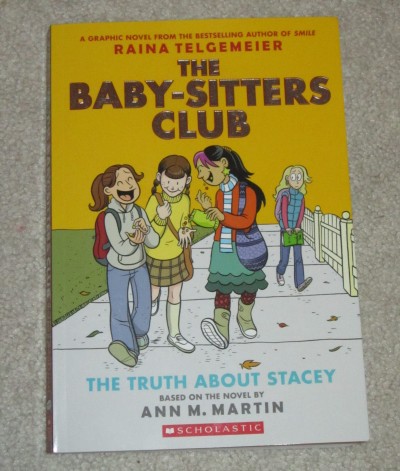 You guys might’ve heard that I’m a wee bit of a BSC fan (BSC, yeah you know me). Karl heard that too and ended up getting me the first four graphic novelizations of the original series. Initially, I was apprehensive. Would the graphic novels live up to my memories? Would having the girls right there in front of me, in living colour, take away from my the pictures of them that live(d) in my mind?

The answers are: yes to the first question and no to the second! The books are fantastic. I love them. Here’s why:

Anyway, this post is supposed to be all about Stacey. So, the review: The Truth About Stacey is terrific. It’s enjoyable. It’s…well…let’s hear from Vivi:

“It’s one of my favourite BSC books. I just love the art and the story is really good. My favourite part is when Stacey and Laine meet up and eventually become friends again. It’s just so sweet. By the way, the truth about Stacey is that she has diabetes. Diabetes is when you can’t eat too much sugar or you’ll get sick. Stacey doesn’t always handle it well, but she learns to deal with it more by the end of the book.”