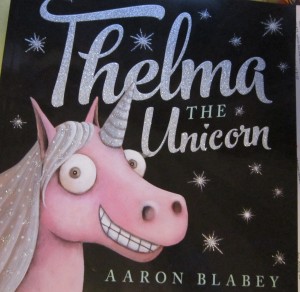 Many times, I buy books based on their reviews.

Occasionally, I hit up Chapters and take a look around the children’s section. Then something inevitably catches my eye and I *must* have it.

And then sometimes…just SOMETIMES…I end up buying a book for a silly reason. A frivolous reason. A reason that might include “it’s about a unicorn” and “the unicorn is pink” plus “the title is SPARKLY.”

I bought Thelma the Unicorn for the third reason. Obviously. Well, that and one other thing.

A few years ago, I wrote a book called Phoebe the Unicorn. I really loved it and so did an editor at a local publishing house. The issue we ran into was the art: she couldn’t figure out how to make it work. I was *kinda* heartbroken because it was as close as I’ve ever been to having a REAL publisher publish something I’ve written. So when I saw Thelma the Unicorn I felt I should support an author (and illustrator) who was able to get their unicorn to market. Makes sense, non?

Well, anyway, Thelma is a superstar.

But what’s the story actually about? Let me break it down in five easy-to-digest points:

1. The art – it’s super-cute and I love, love, love the design of Thelma. The sparkly text on the front cover is fabulous.

2. The rhyming – I’m a sucker for a rhyming book, it’s true. This one is pretty solid. There’s only one page that makes me sort of cringe…it’s this part: “And some were not her fans at all. No some were really mean. And some did just the meanest things she’d really ever seen.” I have issues with the whole “really ever seen” thing. It feels forced and a bit awkward. It reminds me of Giraffes Can’t Dance – I have a similar issue with part of that book.

3. The moral of the story. I read this to Vivi and asked her “So what did you think?” And she said (and this is a direct quote): “I think the take-home message has to be to just be true to yourself. You can’t be happy if you’re being someone else. You have to be comfortable with who you are.” Boom! Any picture book that nails that message home to my five (almost six) year old is a total winner

If you’re looking for a book that appears to be all about being sparkly and pink but is really about something much, much deeper, pick up Thelma. You’re gonna love her.