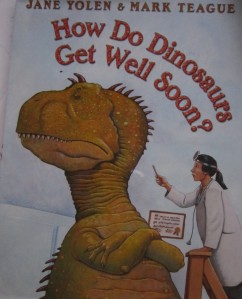 I have three things to say about today’s selection:

As mentioned above, we have read several of the How Do Dinosaurs…? books. This one in particular was in high rotation this year and last.

Because of the kindergarten plague. It basically started in October of 2016 and continued nearly unabated until this past June. Yes. It was that bad (worse, at times). And when your little one is fighting her fifteenth cold of the season, the only thing to do is read a story about some fussy little dinosaurs also trying to recover.

Stuff I love about this book:

The girls always enjoyed this one when they were sniffling and snorting and coughing. I enjoyed pointing out how well the dinosaur ended up taking his medicine and how good he was at the doctor’s office.

I am half looking forward to school starting in a couple of weeks (Vivi is heading into grade ONE! Lily still has another year at home with me…something she reminds me of on a near-daily basis).

The other not-looking-forward-to-it half is dreading the return of the plague. Seasoned parents tell me that it gets a little better year after year.

One can only hope. I’ll be keeping this book handy, just in case.